What Sanding Fenders Taught Me About the Design Business

Dave Stollery is the real deal. I worked for him in 1986 and 1987. He’s an independent automotive designer. Dave attended the Art Center College of Design in Pasadena, CA in the late 60s/early 70s. After graduating, he designed for General Motors. Years later he set up the first Japanese Auto Design Center in America, the Calty Design Center for Toyota. He also designed several production cars, including the very popular Toyota Celica (Second generation / A40 Series). 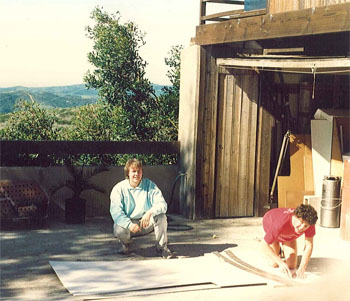 When I met Dave he had a business called Industrial Design Research. He ran the studio out of his house and garage in the hills overlooking Laguna Beach (see photo of me and Warren). In that garage I worked on concept vehicle projects for various manufacturers. Dave was a maverick and a maniac. He used to write contracts with major car companies that actually specified – and I paraphrase “all communications between client and designer should be pleasant in tone and tenor.” He was a bit eccentric. He also was passionate, completely passionate about design.

I should also mention that Dave was a child actor. He played Marty on the old Disney TV series “Spin & Marty.” Though the series was successful, Dave stopped acting in teen years to pursue what he really loved – automotive design.

Dave believed in doing. To say he was ‘hands-on,’ would be an understatement. He would push you out of the way to fiberglass, grind and body fill the full-size automotive models if you weren’t doing it the way he wanted. It wasn’t uncommon for him to be grinding, sanding and sketching before you got there in the AM. 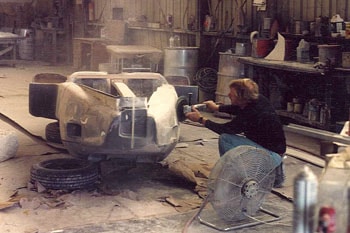 A lot of people thought he was a jerk. I got him. He used to say people called him ‘interesting’ a lot. Which he thought was puzzling, until he came to the conclusion that saying you were interesting was just another way to say you were an asshole. Somehow he embraced that. That was Dave.

While sanding fenders, I learned that:

Sometimes I miss hanging out in Dave’s garage. I hope that I somehow have brought a little of Dave’s garage to the studio at Back40.

I referred to Dave in the past tense ’cause working there is well… history. But Dave is still designing and creating amazing automotive designs. He’s in his 60s now. I found an article about one of his projects in December’s Automotive Magazine. It’s about a car called the AREX, he has been working on this project for 15 years. Oh, did I mention, he’s also tenacious.

A Decade of Back40 Logo Designs