Our Apple Adventure: Macs at Back40

With the news of Steve Jobs passing, I wanted to post some thoughts on my longtime relationship with his amazing creation, the Macintosh computer.

In 1985, as I graduated from design school, they were literally wheeling in the Macs as we left. I had just attended 4 years at the country’s best design school and never used a computer.

In 1995, I bought my first Mac. A Power Macintosh 7100. At that time, I was a syndicated cartoonist and I wanted to make a fan website for my cartoon strip, DAVE. I ordered the 7100 by phone from the Mac Warehouse catalog (because I didn’t have internet – that’s how we rolled back then). It was a beige desktop model. Not much to look at. It had a floppy drive and a separate modem. I also ordered a scanner, Wacom pad, a rather large CRT monitor and PhotoShop 5.5. Soon I was in business, scanning my hand-drawn cartoons and building them digitally – and making my first website: DAVEtoon.com. I was smitten. 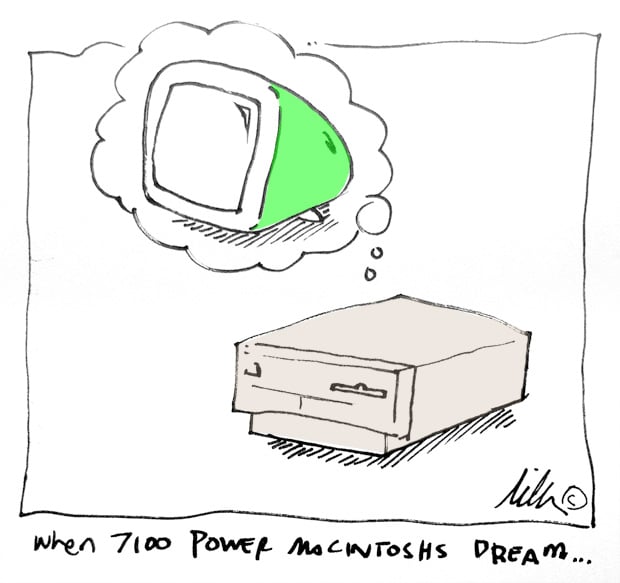 I used that Mac for a long time. I retired it in 2000, when I started Back40 Design. My new business deserved a new computer, so I bought an iMac. One of those bulbous fruit-flavored ones. Mine was lime green. The iMac was available in several configurations. I was trying to save cash for this start-up endeavor, so I opted for the cheaper, slower, base model. As I drove home from CompUSA, I pulled over in Choctaw and turned around. Receipt in hand, I traded the recently purchased (like 30 minutes ago) iMac for the faster, better iMac. Good business move.

As soon as I built my first website that I could host, I bought a Mac server. Why serve websites on a Mac? Because that’s what I knew. Macs. So its 2001 and I’m a Mac web design shop and all is well with the universe – until the company grew.

Then I switched to PCs. Supporting, networking and purchasing Macs proved too costly for my small cash-strapped company. PCs could be custom-built and repaired by Back40 staff. Macs, well, they had to get shipped back to the manufacturer or driven to OKC to the ONLY Mac service place in the city (authorized or not). I wish I could remember their name. I made several trips. Needless to say, for my growing company, the challenges of being a Mac shop didn’t outweigh the benefits of working in Mac OS.

Fast forward to 2011 and here we are now, an integrated design studio. Designers and developers use Macs and most everyone else, including me, are on PCs. Costs between the two platforms are very competitive and frankly, cash isn’t as tight. Plus, for whatever reason, servicing doesn’t seem to be an issue. I think the biggest factor in re-embracing the Mac platform is that they’re strongly preferred by the “creatives” here. Happy creatives make better websites. Better websites make happier clients. Happier clients make Back40 a profitable design business.

It’s an amazing journey – where Apple has come from to present day. Steve Jobs and Apple, are the most prolific product designers of our times.

Rest in peace, Steve Jobs, I raise my iPhone and say thanks for the great products.

A Domain by any Other Name

By Jonathan Siler
Back to Blog