It was a bad idea. It was just what we needed.

For the past several years we’ve run two full page ads in the Armstrong Auditorium playbill. If you are not familiar with the Armstrong Auditorium, it’s a performance venue located in North Edmond that brings in world renowned musicians and vocalists (like the Vienna Boys Choir). It’s kind of fancy. We market ourselves in this publication because we figure it’s a valuable way to reach regional business owners and decision makers. Our assignment is to design two simple ‘brand reinforcing ads’ for Back40 Design and our monthly publication, Outlook magazine. 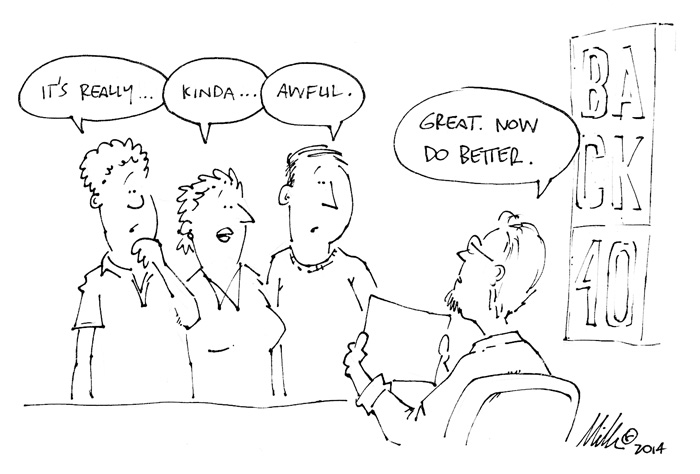 Since this is an in-house project, it didn’t follow our standard project protocols. It landed on my desk. So I had at it.

I nailed the Back40 ad concept quickly. Got it out to the team, and they agreed. That concept went on to production. Done. Great. Next. The concept work for Outlook magazine took a different path. I wasn’t coming up with anything outstanding or even worth sharing. So in my infinite wisdom, I decided to champion a really bad idea to see what would happen.

I chose “Well read & not dead.” Yeah, it was bad. But I floated it like it was as good as the Back40 ad idea. I explained to blank faces that this headline got the reader’s attention and told them our magazine was popular, established and well-known. And it emphasized that print is not dead. It was an awful idea. It was just what we needed.

I left my submission with the team and returned to my office. In short order, I got a rewrite back from the team. “Print’s not dead – we’re well read.” OK, thats a start. I see what they’re doing there – use the boss’s idea – but improve it. I knew we were on the right track. After some more silence, I got what I was waiting for – ideas. Ideas that were much better than mine. After another round, someone handed me the best idea. The one we’re going to use.

Sometimes a bad idea is just as useful as a good one.

The Art of the Party