Small Business of the Year

When we were honored with the Edmond Chamber’s Small Business of the Year Award, our company appeared on the cover of the Outlook Magazine. As I understand it, the cover is usually reserved for editorial content – so it was a pretty big deal to swing that. Well, not really, because I publish the Outlook Magazine. But still – it was pretty cool.

But in my infinite wisdom, I forgot to post a blog declaring the win. So apologies to the Edmond Chamber – here it is.

We won Edmond’s Small Business of the Year. The award was sponsored by Arvest Bank. Here’s the text from our cover story in the February 2015 issue: 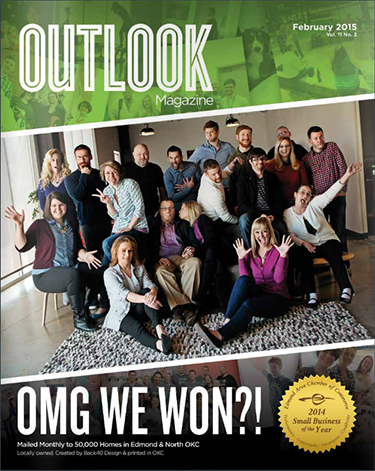 For owner Dave Miller, the greatest honor in winning Small Business of the Year is the value placed on his company’s contribution to the community. Back40 Design offers web design services and publishes Outlook magazine, and in both cases, great emphasis is placed on assisting and promoting non-profit and community efforts.

“I’m proud of the way we quietly contribute, and by that, I mean that we do a lot of discounted and pro bono work for nonprofits,” Miller said. “In addition, nearly every magazine issue we publish touches upon an individual who does good work or an organization that gives back to the community. We’ve grown our design firm by being loyal to causes we believe in.”

For example, Back40 Design recently created the Swine Week website at no cost to Edmond Memorial High School to help students expand their fundraising outreach. Each year the students raise money for a designated cause in the community, and this year they plan to raise $350,000 for Angels Foster Family Network of OKC.

Another organization important to Back40 Design is the Reason to Believe Ranch, where horse therapy promotes healing for handicapped and troubled children, developmentally disabled adults and victims of human trafficking.

“It’s in our company DNA to want to give back,” Miller said. Several employees at Back40 and Outlook are involved in community efforts outside of work hours, including serving on boards for nonprofits and volunteering with various organizations.

Meanwhile, Back40 Design continues to grow and work with some of Oklahoma City’s largest brands through their web design services, from Water4 Foundation and Love’s to Frontier City and Sonic Corporation. Whether a company needs branding, a brochure design, a full website construction, or just ideas, Back40 Design offers all these services in-house. Especially ideas

Creative ideas are the foundation of Miller’s career. Before he started Back40 Design, he was a designer who worked in creative industries, including cartooning and toy development. At the Rhode Island School of Design, he studied industrial design, and his first job was designing cars. Following that, he became a storyboard animation artist and director of Saturday morning kids shows in Hollywood.

From 1992 to 1999, Miller drew a comic strip named Dave, which he describes as a 20-something single guy focused on work, pop culture, relationships and dating. The strip was syndicated daily in 160 national newspapers such as the Chicago Tribune, San Francisco Examiner and the Dallas Morning News.

“I created Dave for eight years, but being a cartoonist was a solitary existence. I missed interacting with other creatives and working with clients,” Miller said.

In 1999, he decided not to renew his comic strip and went to work for Hasbro as a toy designer, working on recognized brands including Barney and Teletubbies. Unfortunately, he was laid off, right around the time he and his wife, Sandy, adopted their two godchildren from Oklahoma. They decided to leave their current home in New England and move closer to his wife’s family in Prague, OK. It was a leap of faith.

In 2000, the world of website design was relatively new, but Miller’s company started to gain a following. He also began a Shawnee publication very similar to Outlook magazine, called Shawnee Shopper. Within a few years, the business had expanded enough that he needed to get an outside office and hire a few employees.

Moving to Edmond was in the back of his mind from the beginning. He’d fallen in love with the hills, trees and parks of southeast Edmond the first time he saw it. It reminded him of his home back east.

In 2005, Miller was driving to Oklahoma City two or three days a week to work with clients, so it was a logical time to move closer. He and Sandy moved to Edmond, opened an office on Memorial Road, and started Edmond Outlook magazine, now called Outlook.

“This is our tenth year publishing Outlook, and it’s been so rewarding. We tell stories that might not get told otherwise. It’s exciting, really. I can be at the store and start talking to someone, and suddenly there’s another story to tell. Oklahoma is filled with interesting people. The magazine has been a great way to quietly give back to the community.”

In 2012, the office relocated to 5th and Littler. Miller wanted the space to foster creativity, so he designed large, open areas for the development team, as well as private offices. He describes it as, “An open, creative space on one of Edmond’s coolest streets. It’s a great place to bring clients and share ideas.

2014 was a great year for Back40, the company grew its client base, revenue and staff—now at 18 team members. The goal? To accommodate the growing clientele while still providing the personal attention that Back40 has been known for. He’s proud that his family-owned company has blossomed.

“Sandy and I started this business 15 years ago in our den, looking out at the back forty. We can’t believe how far we’ve come.  I feel fortunate to have put together and work with such a creative team. We’ve built thousands of beautiful websites and shared just as many incredible stories,” said Miller. “We appreciate the Edmond Chamber and Arvest Bank recognizing Back40 Design as a vital part of Edmond and plan to continue quietly contributing to our community.”

Learn more about the services Back40 Design offers at back40design.com. 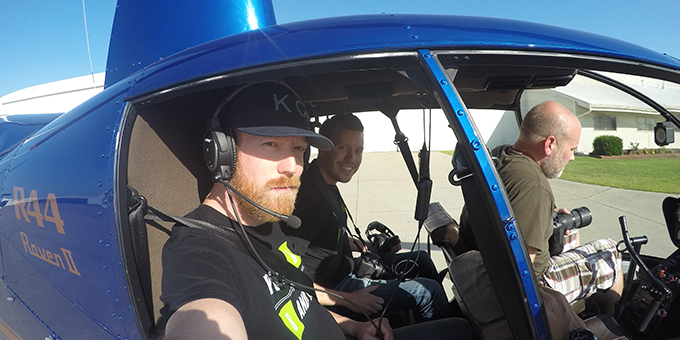 We’re So Over Oklahoma City