Mylar Milestones: Celebrating 30 Years at Back40

Nothing says ‘thank you’ like a giant mylar balloon.

To all the employees that have spent nearly a decade making Back40 what it is today, I say thank you. 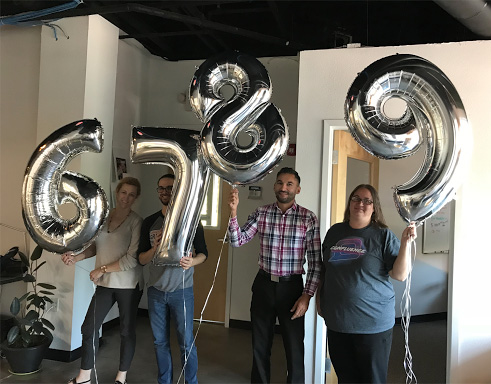 Reyna joined Back40 9 years and 3 buildings ago. When she joined Back40, we were officing out of a store front in a strip mall on Memorial Road (btw, it was always a dream of mine to own a business in a strip mall). Reyna started as a Jr. Project Manager. She rose quickly to become Back40’s sole project manager for many, many years. She’s dedicated – answering issues after hours and on weekends. And she know’s just about every Back40 client. Thank you for being here and staying here.

JR was hired at Back40 8 years and 3 buildings ago. He was part of group interview hiring process. I’m glad we don’t do group interviews anymore – bad idea. Picture a room full of candidates all vying for the same position. Anyway, JR survived that process and was the stand-out talent in the group. I’m so glad he joined us. JR has brought hundreds of projects into the company with revenue in the millions. He doesn’t oversell. He understands our clients and our capabilities. I appreciate JR and thank him every year for not becoming a fireman (supposedly, his next choice after Back40).

Matt joined us 7 years and just 2 buildings ago as a developer. I’ve made some questionable, mediocre and outright bad hiring decisions over the years. But, I can honestly say hiring Matt was a great one. He’s always learning. And he’s a solid, dependable part of Back40. He’s a great resource and a great mentor for our developers and team.

Andrea joined us 6 years and 2 buildings ago. We had the unfortunate experience of having a bookkeeper quit without notice. I don’t wish that on any business. My wife, Sandy had to step in again and run the books until we were lucky enough to find Andrea. Sandy and I were greatly relieved. Andrea is a Bookkeeper Plus! Thank you for wearing so many hats at Back40.

And here’s to many more…

I look forward to working with these fine folks everyday. They are self-directed professionals. I thank them all for making our company what it is today. They make me want to be a better boss.

The design is in the details, a print project explained.

By Ryan Kirkpatrick
Back to Blog