Cross browser testing refers to making sure a website and all its integrated applications work across all the major web browsers. Testing across multiple browsers helps insure that the look-and-feel as well as the functionality of your website is consistent for both you and your users.

How Do We Test Your Site?

Quite simply, we view and test your applications in every browser. We test in the most commonly used browsers including the most used/latest releases of Firefox, Google Chrome, Safari, and Internet Explorers 7, 8, and 9.

We make sure that every aspect of your website, from proper element positioning of graphic and text elements to making sure your Javelin CMS modules function, look, and work consistently every time.

Why Don’t We Test in Internet Explorer 6 and Earlier? 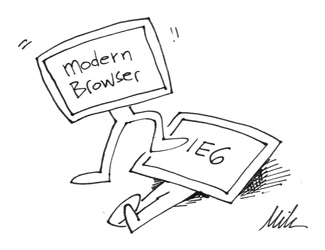 Internet Explorer 6 (and earlier versions) are out of date and effectively obsolete. Internet Explorer 6 (IE6) was released in 2001 (see things that were cool in 2001). IE6 as a browser has no place in the modern web. If we were to make sure every site looked and worked the same in IE6 and all the modern browsers, we would not be able to give you or your users a full web experience. Some developers would even go on record and say IE6 is dead weight (including me).

How Do We Know What to Test?

The web has standards set by the World Wide Web Consortium, or the
W3C. The W3C is a group of internationals bent on making sure the web
can continue to grow as new technologies become present, while also
allowing for graceful degradation of older technologies as they are
phased out of the current standards.

There is also something called a standards compliant browser which is
a browser that adheres to the W3C’s standards of web usage. While no
browser completely follows the standards, there are a few that follow it better than others.

Why is Internet Explorer all by its lonesome? Well, in the early
days of the web, it was more important to be the most popular because
that meant that everyone used your programming languages so they’d work in your browser.
Netscape Navigator has gone by the wayside but they brought us
JavaScript, which made it the most popular browser for a while.

IE is still a holdover from that old process of “my way or the
highway.” Newer incarnations, specifically IE9, are catching up, but it
still has a ways to go before it can be considered “standards
compliant.”

Getting more out of Google

By Matt Milburn
Back to Blog