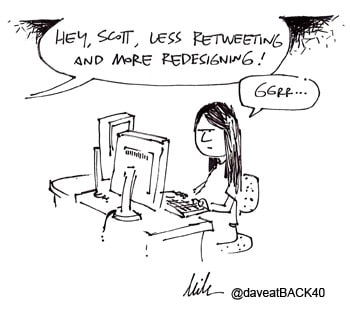 I think I finally get the twitter deal. Little background on why it took me so long. I fear anything that leaves permanent marks: school suspensions, tattoos, felony charges, sharpies (“permanent” is written right on the side), farting in church, and SOCIAL NETWORKING. Maybe its a generational thing – or my upbringing. Or my mom. Or all three. Whatever it was, I panicked at the thought of some staff member being able to say something not harmoniously aligned with Back40’s company brand – and being written into history forever. I have worked really hard for the past 10 years to maintain a positive company image – a good reputation, if you will. If it’s not approved by me; don’t post it.

I freaked when…
Amy finished an awesomely productive design meeting with the Oklahoma City Fraternal Order of Police and she cleverly tweeted that the conference room still smelled like pork.

That tweet comes to mind immediately, but there’s more. And there will be more. My fear returns. What if potential clients hunt down Back40 staff’s
personal twitter accounts and read these comments? My solution was to tell the staff they can no longer tweet about Back40. Seems rather draconian – but I did it. What happened? I lost a bunch of really active tweeters who could tweet about what they love and what they do all day. Nice move, Back40 Overlord.

Contempt prior to investigation…
I lived with that decision for a while, most of the staff protected their twitter accounts (made them private) and a little wall of distrust went up between me and the tweeters. So, being the sensitive Overlord that I am, I rethought the situation and I began educating myself on this micro-blogging craze. With tons of information available on the internet about twitter and Social Networking – I bought a book. Can’t say I finished it, but I did get enough of an understanding that these are different times. From this point on (explosion of social networking) everyone will have a digital history. My digital history started in my mid-40s, while most of the Back40 twittering staff’s will start in their 20s. That’s a long digital trail. In the future, permanent marks won’t have the stigma that I associate with them. Everyone will have them. So why try to control it.

Tweet away…
I recently met with Amy and I apologized for my previous position on Twitter and told her to tweet away. You know what? She was relieved. She missed
tweeting about her work and Back40. I told her that I trust her to tweet whats appropriate about the company. Also, shortly after this reversal, several other staff members unprotected their twitter accounts and went public again.

I’m a Newbie…
Prolly the best part of all this, is that now I enjoy tweeting. Sure, I do stupid newbie stuff – like tweeting about my cat – but you would too if your
cat was nearly 20 pounds and likes to sit on your laptop. But I digress. I have a personal twitter account @daveatBACK40 (cat related posts) and I also post on the company account @back40design (non-cat related posts) with other staff members. We all sign our company posts with a signature, example: “~dave” so followers know who’s posting what.

There’s very little patience for those wishing to move slowly in the world of internet development – perhaps its allowable to catch your breath or figure out why something isn’t working, but then you need to get moving again. If you want a moment to last on the internet, take a screenshot.